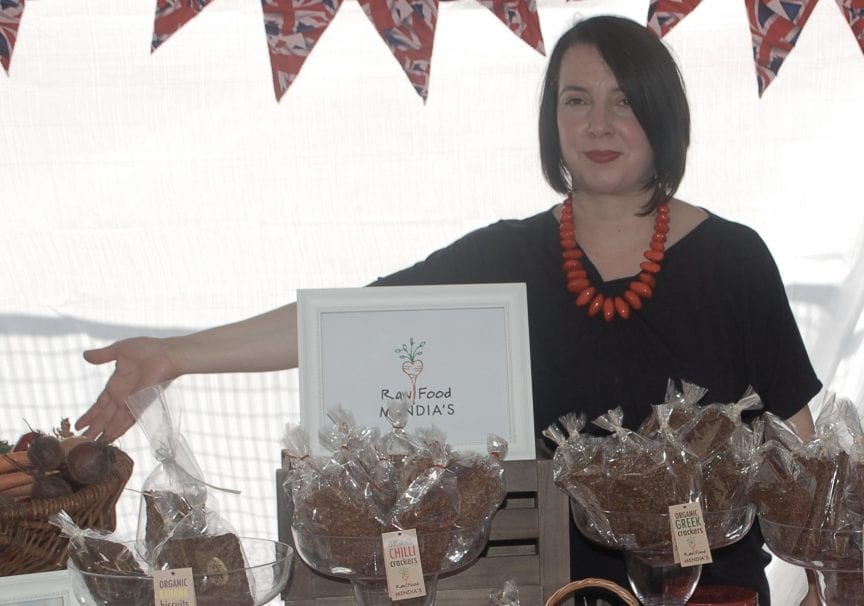 Larraitz Garmendia launched her new business, Mendia’s Raw Food, in June 2016, and it’s based in the Royal Borough of Kensington and Chelsea. Her company’s delicious foods have already had a prestigious award from the Soil Association’s Best of Organic Market (BOOM) Awards 2016 with her banana biscuits garnering first place in the Children’s Food section.

Lara’s first career was in hairdressing and she came to London from her native country of Spain when she was just 18 to study hairstyling at the Sassoon Academy. For many years she and her husband have run Gravity Hair and Beauty on Ladbroke Grove and she still works one day a week there, while devoting the bulk of her time to her new enterprise.

Lara takes up her story, “I’ve always been a keen cook and very interested in healthy eating and cooking, especially for my two children. In 2006, I started to suffer some health problems, even blackouts, which was quite scary.

“My doctor at the time was unable to help me but then I went to see an alternative practitioner who was able to show that my problems were being caused by allergies. I found out I was allergic to wheat, almonds, apples and soya, so I decided to start making my own healthy, allergen-free crackers and snacks, and my health improved dramatically.

“That gave me the idea for my business. Even simple foods like crackers available in mainstream shops contained nuts. I realised there was a gap in the market for foods that were organic, suitable for vegans and 100% free of things that cause allergic reactions, but still tasty.

“Mendia’s Raw Foods has a range of products including crackers which are made by dehydrating the ingredients at low temperatures, rather than using traditional baking methods. The crackers come in three varieties, chilli, beetroot and Greek, which include olives. I’m also making an organic crispy onion snack as well as the banana biscuits which won the BOOM award. I was delighted to be nominated and I couldn’t believe it when I won! That’s been a real confidence booster.

“One of my hairdressing customers told me about the Portobello Business Centre. I went on one of their courses for start-ups and began attending the monthly networking meetings which were incredibly useful.

“Maria Stammers is now my business advisor and she’s been helping with lots of support and sound advice. She’s given me advice on everything from accounting to packaging and she’s been especially helpful with pricing, one of the most difficult things to get right. I’m now open for business via my website.

“I’m now approaching retailers that are suitable for stocking my products and I know Maria will be a big help with that. As well as practical advice, the encouragement and moral support I’ve had from the Business Centre have been fantastic.”