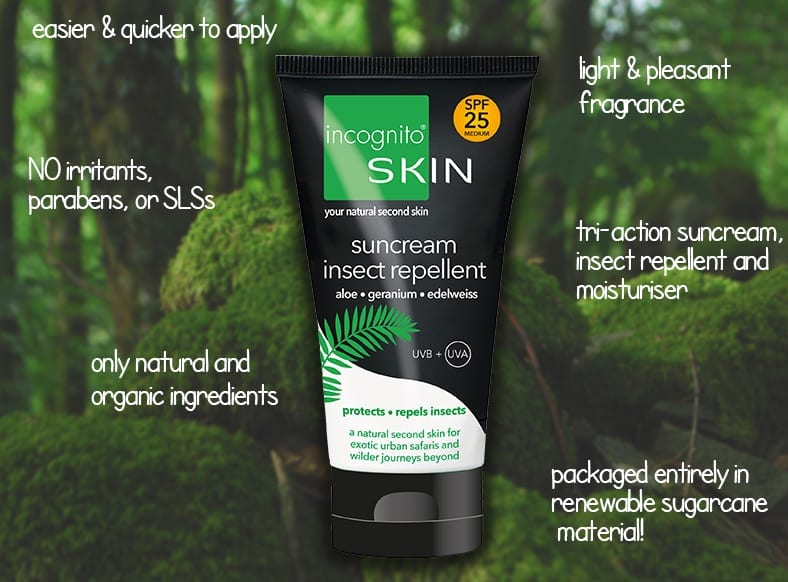 Howard Carter had powerful personal reasons for founding Incognito Anti-Mosquito after a successful business career in magazine publishing. In 1997 he came down with malaria in India, only to then contract dengue fever the next year in Thailand.

“Lying in bed at the Hospital for Tropical Diseases recovering from dengue fever,” Howard recalls, “I began thinking that there must be a better way to avoid being bitten by mosquitoes. I’d been using a product based on DEET, the best known active ingredient in mosquito repellents, and that hadn’t worked for me. What’s more, I discovered that there was research indicating that mosquitoes are building immunity to DEET, and that it could cause health problems. There had to be something better.

“I spent several years travelling the world, looking for natural ingredients that were both non-toxic to humans and repellent to mosquitoes and other insects. I spoke to doctors, nurses and shamans looking for the perfect formula, and along the way I met my wife Patricia who is also my business partner.”

By 2006, Howard had come up with a formula, and incognito was finally launched in 2007 with one product line – the insect repellent spray, testing 82% effective. “I decided it was time to take the plunge and turn this into a business. That’s when I contacted the Portobello Business Centre”.

“Colin Rutt was assigned as my business advisor who was a huge help in supporting the practical challenges of getting a business off the ground. At one point, we were ready to throw in the towel, mainly due to the complexities of arranging production, but Colin’s encouragement kept us going.

Our newest achievement is the launch of incognito Second Skin – a trio of natural products packaged in renewable sugarcane plastic and packed full of natural and organic ingredients. Included in the trio is our suncream insect repellent For every 1kg of sugarcane packaging we use, 4.6kg of carbon is prevented from entering the atmosphere.

“Now we’re sold in the some of UK’s leading retailers, including Waitrose, Holland and Barrett, Sainsbury’s, Robert Dyas, Planet Organic, and Wholefoods!

“Colin continues to be a true brand ambassador for incognito; to this day he talks about the brand to people he meets, he has also helped us negotiate the complicated world of import and export, introduced us to important contacts, and advised us on business strategy. The Portobello Business Centre is a great resource, and I’d certainly recommend it to anyone starting out in business.”

Book an Appointment
Please book an appointment if you are looking for business advice, funding or face-to-face business support and mentoring!
Book Now
Book Now

Create Your Own Shopify Website From Scratch Sold Out