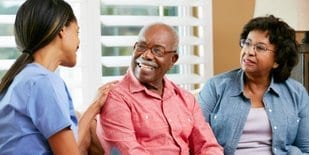 Anab Hussein is the manager of Hope Care Agency, a domiciliary care agency based in North Kensington. She created the Care Agency in challenging circumstances in 2012 and believes her story could inspire others from similar backgrounds to pursue their own dreams. We sat down with Anab in her office in West London to find out more…

What does Hope Care do?

‘We are a domiciliary care agency. We do practical work in people’s homes, for those who don’t go to a care home.

‘We implement what social services has already planned for them. We also have service users who we support with independent living: personal care such as washing and dressing, and domestic care like shopping.

‘People who aren’t financially independent find us via social services. People with some money find us through our website, by word of mouth, adverts or flyers. At the moment we have 56 service users and 38 carers traveling around.

Why and how did you start?

‘Years before I started, I was at uni studying social work. My dad was not well, so I was caring for him. I also had a desire to get to know people who weren’t in my family. I worked for a care agency as a carer then a supervisor. I was a care manager when I was made redundant in 2010. I was made redundant so easily! So, I decided I would work for myself.

‘It took two years to be ready, 2010 to 2012. I registered Hope Care bit-by-bit, the insurance, the policies. I was at home, but I had the vision of what I wanted to do. I was looking for an office and somebody in the Somali community suggested an place on Ladbroke Grove.

‘In 2012 I opened Hope. I went to the local jobcentre to advertise for carers. I was paying the rent from my own pocket, borrowing a lot of money. It was just me at first, really struggling. I went to the Arab and Somali communities to advertise.

‘I found two clients and Hope became a third party to them, alongside social services. Then my rent was being paid. I still wasn’t breaking even, but the stress was less. I knew that if these two people were happy, more would come.

‘Victoria Borwick was the MP for Kensington at the time and she advised me to advertise Hope on the council website’.

‘I wanted more money, more employees, more service users from different backgrounds. I wanted to break the language barrier. I wanted to prove that a single, Somali mother can raise the children and go to work.

‘Seeing my dad need that service meant that I learned a skill I never knew about, I said “I want to make a difference to people like him, sitting at home, lonely”. Before that, my dad was a doctor at St Mary’s hospital, he taught me how to talk with everybody’.

This is a Success Story – how do you define success?

‘Looking for bigger things so my kids look up to me. I want them to see me making a difference in the community.

‘A smile from one carer a day, a smile on the face of a service user, children living happily, people learning a new skill, a carer getting a training certificate that Hope has funded.

‘Quality care is a success.

‘Hope Care opened a lot of doors for me, but I want more. I want people to see that the person behind Hope is a refugee, a single mum, I was on benefits. I want to repay the country for what it paid me while I was struggling’.

How did PBC help you?

‘PBC opened my eyes. I was stressed when I went to see Maria, struggling to pay the rent. She opened my eyes to different places in the community: I went to community centres in W10 and W11 and made speeches, I told them about Hope. I approached the communities, Somali, Sudanese; I went to the library and left my details. People would make appointments.

‘I can’t thank Maria enough. I was worried about what they would say at PBC. It was a big thing. When you’re stressed and along, you need someone to talk to. I would be a different person if Maria wasn’t there that day. She listened for one hour, I said ‘thank you,’ I loved it, it was priceless, I’ll never forget it, honestly.

‘Maria followed up, she saw that I was stressed. She kept asking me what I’d done, so I told her, step-by-step, how everything went. When I had five clients, I came to see her again to say, ‘thank you’ and I still use the tactics that she gave me’.

For more information or to contact Hope Care Agency:

Introduction to Self Employment with Laurie Bernard